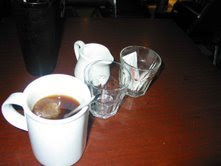 Reading Jo Stockton's comment about iced tea in her post, Simplify (Times Three), reminded me of a couple of conversations involving tea.

American Tea
Woodsy: Gypsy Jen, what are you doing?
Gypsy Jen: Making tea.
Woodsy: But, you put the tea bag in the cup and poured hot water on top. That's not making tea.
Gypsy Jen: Oh, not you too. Look, it's American tea, OK! I make the tea in the cup, then I save the teabag, and then I use it at least three more times. Listen Woodsy, I am half Jewish and half Armenian Gypsy. Making tea that way, that is tradition!
Tea Song for Gypsy Jen 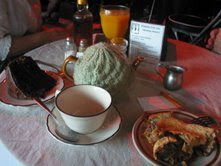 Me three. Just don't let anybody spot you at it, if you ever do afternoon cream tea at the Empress Hotel's Tea Room in Victoria. A flurry of politely-uplifted pinkies will gouge out your eyes before ya know it...

If I ever go to the Empress Hotel's Tea Room, Coyote, I will bring you along and you can chomp off their bony little prodding fingers. I know how much you like Lady Fingers

Us coyotes ain't afraid of much, ma'am, but I greatly fear blue-haired tea grannies.

They're crueller than badgers, and their vintage brollies cause scars...

Can't you fight off their brollies with your longsword?

I guess I'll have to bring Dwarfie with me then... he packs a wicked streak of cussing. That should ward off ward those old biddies!

Sorry, Sweety, I'm as skittish around the ladies who lunch as our canine friend.

Aye, you males... so afraid of us females all the time! I will bring some sweet lass, she'll fight those old birds bravely along my side!