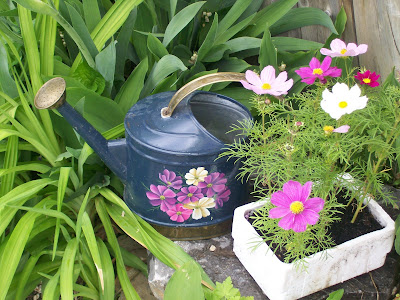 Years ago, when I lived in the country, in a small log cabin, I was given a package of mixed wildflower seeds. This was the start of my love of gardening.

Amongst the many beautiful flowers that grew from those seeds, all in a tangle of erratic brilliant colours, one in particular caught my fancy - the cosmos*. When fall came, just before the first frost, I collected, segregated, and dried the seeds from my wildflower bed.

Come spring, I purposefully planted all the seeds of my favoured flower, the cosmos, at the entrance to my cabin to create a wide frenzied patch of soft varied pinks and deep brilliant magenta. They flowered from early spring until late fall. They were stunning and they were admired by all who visited.

One day when Papa was over, he stood in front of the flowers staring at them for a while before commenting, "Did you know that those were your grandmother's favourite flower?" I had not known that.

Years later when I traveled to the small island that my paternal ancestors had first settled on and cleared for farming, I was pleasantly surprised to find that everywhere I walked cosmos grew in abundance. They bordered yards and driveways, were interspersed into tamed gardens, and were scattered wildly in fields.

Then, not so long ago when I lived in the suburbs, a dear friend painted cosmos on a watering can for me (see picture). Needless to say, I was thrilled. I had never told her about my love of cosmos. Amongst the dozens of varieties of flowers in my garden, she had picked the cosmos to paint because she felt they reminded her of me.

It has been a while since I grew comsos, but yesterday I planted eighteen cosmos plants in my garden. I can't wait until fall to collect the seeds, so that next spring I can grow a huge crazy patch of them.

*"The word Cosmos is derived from the Greek, which means a balanced universe."
Posted by Woodsy at 10:32 AM

I really like cosmos too - the leaves are so feathery

These are lovely -- I know nothing about plants and I had never heard of them before. We're hoping to find time to put in a little flower garden this summer...I'm putting cosmos on my list.

Nursemyra, I love the feathery leaves too...

Lynn, they are low maintenance and beautiful...

Zoom, Close - his name was Cosmo... But, did they ever call him that?

I love cosmos too. My mom always has them in her garden, along with bachelors' buttons, poppies and other beauties.

HEY!! How very cool to see you blogging again. And what an interesting choice of favourite flowers. I’m kind of fond of impatiens. They also come in lots of lovely colours and I like their name and I love that they’re so hardy and last forever. One year when I was living in Southern Ontario, I planted a bed of impatiens and we had such a mild winter that they were still blooming and lively the following spring. (I guess they forgot that they were annuals). I also like snapdragons – they’re very hardy, too. And fun to play with. Are you planting any snapdragons?

Jen G., My package of flowers also included bachelor buttons and small yellow poppies... Maybe your mom was once given the same package of seeds by the same Flower Fairy.

XUP, Impatiens are indeed lovely (as you are too). Snapdragons! I forgot about those... they are pretty and colourful, but they bite (as you do too).