Of Pigeons and Feathers

Last August, I came upon this insightful gentle man. I was intrigued by the feathers protruding from his backpack, and his slow interaction with the birds surrounding him. 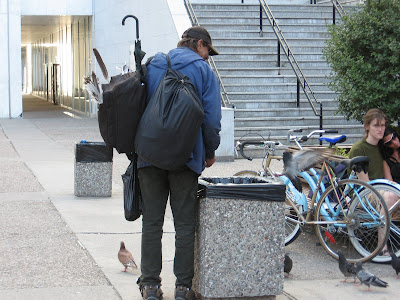 He was picking at something in the garbage and feeding it to a pigeon perched on the garbage can. I missed the shot of the pigeon calmly eating out of this hand. 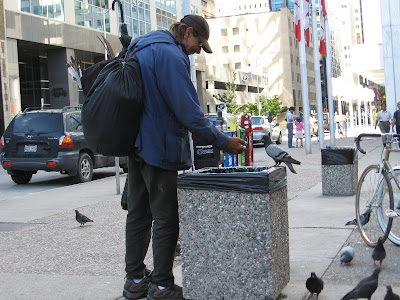 I leaned over to see what he was picking at, and I saw a dismembered pigeon - only wings and head remained. (I hope that he was feeding the live pigeon cheese that was next to the partial pigeon) 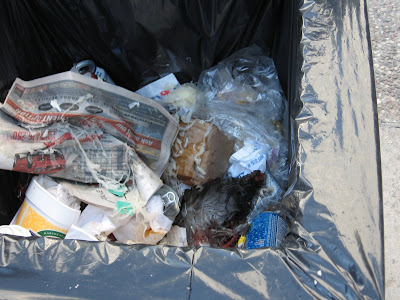 We chatted and he informed me that he knew why the pigeon had been mutilated. According to him, there are people who love pigeon meat. They scatter rice and grains for the pigeons to feed on, which when ingested expands and ruptures their stomach and kills them. The pigeon meat aficionados then come along and collect the carcasses, leaving behind heads and wings. Could it be that this explanation resolves the murder mystery?

Before parting ways, he asked that I take time to look at pigeons as they take flight, so that I might be astonished at the colour of the feathers under their wings. He also urged me to hold a feather up to the sun and look at the sparkling light produced by the sun filtering through it.

I encourage you to do the same.
Posted by Woodsy at 10:08 AM

Seems feeding the rice is an urban myth: http://www.snopes.com/critters/crusader/birdrice.asp


I've seen a lot of dead pigeons on the web this week...

Nat, A dear friend of mine who is a celebrated ornithologist, confirms that rice would not kill birds.

I prefaced what the person in this account related to me with "according to him" hoping that people would understand that I was just relating his words and not necessarily a fact.

Obviously, you are a wise one who questions and Googles... thanks!

Ah, someone beat me to the Snopes link!

They really should put up signs... "Please don't feed the pigeons pigeons."

RealGrouch, I am in denial that he was feeding the pigeon pigeon. You are not helping with my cheesy attempt at denial.

I'm quite sure the Bald Bumbler is behind this horrific pigeon-killing scheme, but I can't prove it yet. He made his disdain for pigeons AND panhandlers clear with this classic: "Giving panhandlers money is just like feeding pigeons."

Zoom, my ornithologist friend says that is unlikely that the pigeons froze or starved to death. He mentioned that a few years ago there was a campaign to eliminate pigeons. Hundreds were poisoned, but he doesn't remember who was in charge of the initiative. He also told me that pigeon poop carries "disease" and that it is rational to not want pigeon poop on your windowsills or balcony. I still like pigeons - all pigeons.

XUP, I hear you. Cannibalism is not my thing either.

if pigeons are dying inexplicably, my theory is to blame the catholic church. they excommunicated the Passenger Pigeon in 1703 and look what happened to them.....

check out the song the fantastic Handsome Famiy wrote about them too. they are one of my favourite bands

pigeons are fascinating! if i were going to design a production of angels in america (and i hope to some day), i'd like the angel to have enormous, gorgeously pigeonish wings.

emmet, nice to meet you. When you produce one of those angels, could I please have one? Can you draw a picture for me of what it would look like? I read through some of your blog, and was quite entertained. I have added you to my "you make me talk" side bar.